We were in Barcelona on late March and, as most people who visit that city, we went to Antoni Gaudi’s Sagrada Familia. Going to Barcelona and not seeing La Sagrada Familia is like going to Paris and not seeing the Notre Dame or to Cordoba and skipping the Great Mosque. Whether you are religious or not, Gaudí’s basilica, his magnum opus, is an absolute must see. It’s an architectural wonder, a feast to the eyes and the senses. After finishing the Parc Guell in 1911, Gaudí decided to abandon secular art and devote himself entirely to the Sagrada Familia. He worked on it for over 40 years, living as a virtual hermit in a workshop on the site. When questioned about the slow pace, he is said to have replied, “My client is not in a hurry.” Gaudí’s work on the building is part of a UNESCO World Heritage Site and the basilica, although still work in progress, is the most visited site in Barcelona (some 3 million people a year). But Sagrada Familia doesn’t appeal to everybody and it’s possibly the most controversial place of worship ever built on such an epic scale. George Orwell said it was “one of the most hideous buildings in the world” and rather hoped it would be destroyed during the Spanish Civil War (fortunately, it wasn’t). Salvador Dalí spoke of its “terrifying and edible beauty.” Well, I’ve visited Sagrada Familia twice, and both times I thought it was the most amazing thing I’ve ever seen. The first time, in 2012, I didn’t quite know what to expect and had only seen a few pictures of in travel guides. As I walked in, I gasped, and was immediately overtaken with emotion, tears running down my face. Very unusual for a non-religious person like me… I was moved by the monumental organic beauty of the magnificent structure. This time, I knew what to expect but still got quite emotional and teary-eyed. I hope to go back in 2026, when it’s supposed to be finished, to see it in all its intended splendor. I’ll probably cry again. By the way, 2026 also marks the 100th anniversary of Gaudi’s death. 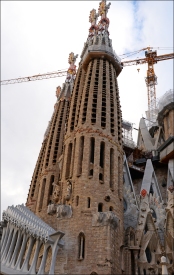 West side of the basilica. The pinnacles of the towers are decorated with colorful mosaics. 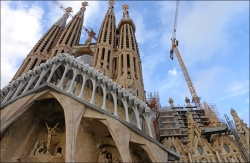 The Passion Facade, on the west side, is dedicated to the suffering and death of Christ, and is nearly complete. It is decorated with sculptures by Josep Maria Subirach.

View of the East side of the basilica, with the Nativity Façade.

The Nativity Façade, dedicated to the birth of Christ, was completed before work was interrupted in 1935 and bears the most direct Gaudi influence.

Nativity entrance to the basilica.

View from the center of the basilica.

Gaudí based his designs on the complex forms we know today as helicoids, hyperboloids and hyperbolic paraboloids.

He borrowed these forms from nature and translated into the design of the columns, vaults and intersecting geometric elements of the structure of the Sagrada Família.

Looking up at the vault crowning the interior of the basilica’s nave, one can see the resemblance of a dense forest of trees with sunlight shining through it 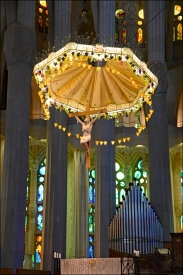 The raised altar is crowned by the Latin cross with a canopy, decorated with vines and grapes. 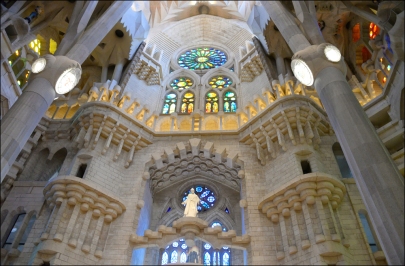 Look at all the details and intricate work in this area of the basilica. 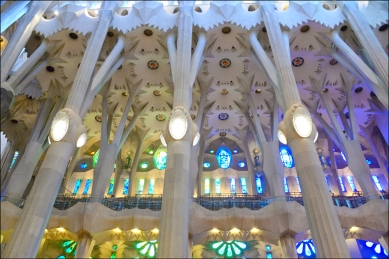 St. George overlooks the portal of the unfinished Glory Façade.

A mesmerizing show of colors from the beautiful stained-glass windows.